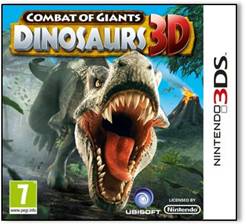 Combat of Giants: Dinosaurs 3D is a game that takes RPG elements and adds them into the era of the giant reptiles. The trailer gives us a small glimpse of the exploration within the game as well as giving us some pre-rendered footage to build up a little hype within the audience.

Watch as a small band of dinosaurs take on a much larger opponent. Watch as they get thrown around by the larger dinosaur. Watch on as a player guides his or her own dinosaur through several scenes that demonstrate key gameplay elements, such as combat, breaking stuff for loot / exploration and lots of navigating.

Combat of Giants: Dinosaurs 3D has a robust list of features –

Features
Dive Into A 3D Jurassic World – Roam the Jurassic world in full 3D and feel the depth of the jungle, crush trees and rocks to get special rewards. Enjoy as well a strong 3D storytelling between 2 intense fights.

Spectacular Combat – Engage in fast-paced fights with direct control over your giant creature. Perform real-time actions such as blocking, dodging, hitting and execute your new super combination attack with a unique fighting style for each dinosaur.

Creating and Customization of Your Unique Dinosaur – Choose and customize your favorite Dinosaur among 18 breeds such as T-Rex, Stegosaurus, Velociraptor, Triceratops, Ankylosaurus, and Baryonyx. With over 35 colors and patterns, your dinosaur will be more unique than ever.

Be sure to check out the…

The games home page at Ubisoft.