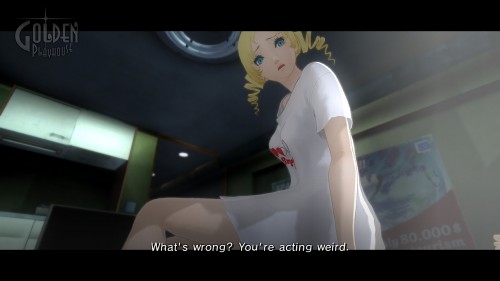 Atlus is keeping their fans well stocked with plenty of Catherine media it seems because today Atlus released a handful of new English screenshots. Or at least screenshots with English subtitles which means that fans may be able to listen to the original Japanese voice actors if they so wish, but this has yet to be confirmed. Either way though these screenshots reveal some of the interaction we can expect between the different characters.

Also released were character bios for each of the three main characters; Catherine, Katherine and Vincent. You can read them below:

Interest in the game is certainly reaching high levels considering this is perhaps the first game of its kind to be localized recently if not at all. We’ll find out just how Catherine will be on July 26th when it releases in the United States on the PlayStation 3 and Xbox 360.