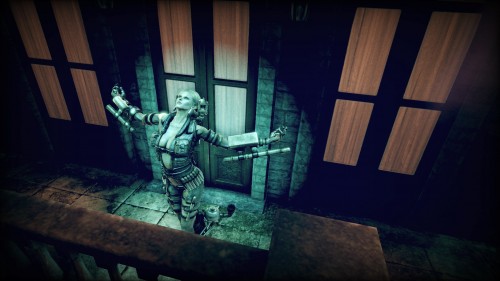 Shadows of the Damned may not be coming out until June 7th but that doesn’t stop EA and GrassHooper Manufacture from releasing a new trailer that was shown at the Game Developer’s Conference last week. The trailer itself shows main character Garcia’s girlfriend, or should I say what is left of her after being taken by the demons and it looks like the demons will take great pleasure in torturing Garcia by using her image as disguises.

Shadows of the Damned will be published under the EA Partneres label much like Crysis 2 will be later this month. But the developers themselves have quite a few games under their belt such as Goichi Suda of Suda51 and Resident Evil’s creator Shinji Mikami. Even the sound is being handled by Akira Yamaoka who handled the sound of another signature horror series, Silent Hill. When this game arrives on the Xbox 360 and Ps3 this summer it will have quite a large following simply because of the developers themselves.

New Ballad of Gay Tony T-Shirts at the Rockstar Warehouse