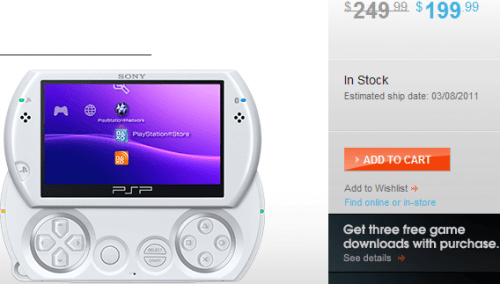 It has been hard to understand Sony lately as far as their handheld division is concerned. First they dropped their PSP-3000 to a price of only $130 for the brand new handheld and then they release a sales line saying that the PSP Go would also be dropped to a $150 price so it would only be a $20 difference between the two versions of their portable game player.

However this is no longer the case because the PSP Go has went back to it’s $200 price range and Sony’s website no longer has the line that stated the double price drop of both systems. Either it was an error in marketing or a pre-mature update but regardless of that, I foresee the sales of the PSP Go to be even worse than they were now that there is a significant price difference between the PSP-3000 and itself.