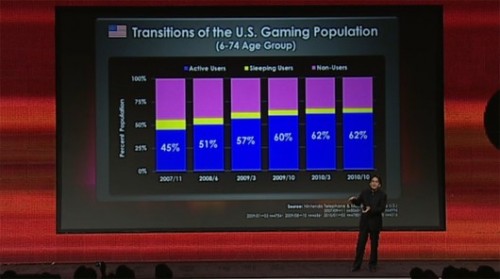 In case you were wondering who was buying Nintendo’s consoles and games and who wasn’t then at GDC Nintendo just revealed a little bit of information regarding this. Nintendo president Satoru Iwata began the Nintendo GDC presentation today with some statistics about the US gaming growth the company has seen since November 2007 until October 2010.

According to their studies they have seen continuous growth over the years with people using their consoles with an increasing decline in “sleeping users” which means people who own their systems but don’t actually use them at all. He went on to describe this bar graph by saying that there are at least 201 million users in the latest version. His statistics also included the fact that the female market for gaming has exploded compared to the male market, and that gamers game less as they grow older. Or maybe they moved on to more elaborate consoles.