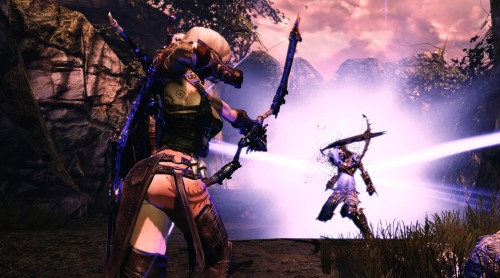 Looks like videogames have enough pull now to pull in star actresses because Bethesda has just announced that Lucy Lawless will be voicing the character of Seraphine in their upcoming dungeon crawler Hunted: The Demon’s Forge. Fans of the Xena: Warrior Princess series and Spartacus: Gods of the Arena should instantly be able to recognize the name due to her playing a major role in both series.

Lucy Lawless’s character Seraphine will be playing an ex-adventurer who has become a temptress now. With the influence of the Demon Forge she becomes a spirit guide that brings Caddoc and E’lara deep into the dark and twisted depths of the world by promising them great riches. Hunted: The Demon’s Forge will be coming out on June 1st for the Xbox 360, PS3 and PC so you will know just how and when you can enter the intense dungeons of The Demon’s Forge.