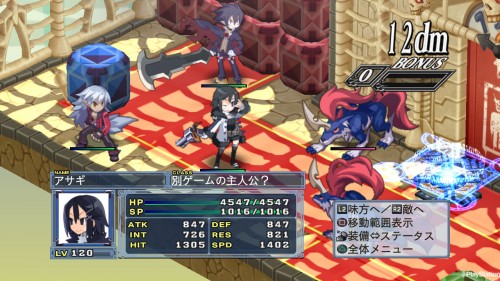 With the current disaster in Japan everyone has banded together in an effort to raise money to try and help out the nation in their time of need and in game developers from the country are helping out as much as they can. Nippon Ichi Software has developed a new way to raise funds for charity while also keeping a long running joke alive.

NIS has long since had a certain character, Asagi, as a character spread out across a number of their games. The poor girl just wants to be the protagonist of her very own game, and although she came close with Asagi Wars she never has made it to being in the spotlight. Well take your bow now Asagi because, as found by Siliconera, the character will be released as paid DLC for Disgaea 4 for 100 yen ($1.25 US).

100% of every sale from Asagi’s character will be donated to help restore areas affected in Japan until June 30th. Currently Asagi is not available on the Japanese PlayStation Store, but a screenshot was revealed on Dengeki that shows her class as being a “protagonist of another game.”