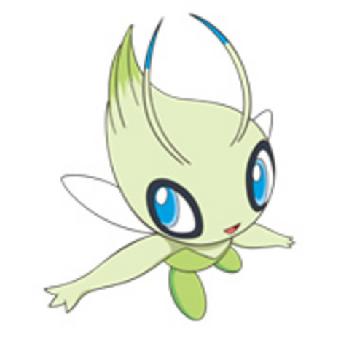 Last week we told you about the three legendary beasts, Entei, Raikou, and Suicune which are all being distributed to the owners of Pokémon Heart Gold, Soul Silver, Diamond, Pearl and Platinum but now it is looking like Celebi will also be given some downloadable love as well as many GameStop employees are reporting that a new Celebi event will happen shortly after. Press materials have apparently shown up a bit early which give a bit of information on this Celebi, and since the Japan had the same treatment last year (though Celebi was distributed over wi-fi), this all makes a lot of sense to see the elusive second generation legend finally getting a release overseas.

From Feb. 27 through March 7, players will be able to download the Celebi which is actually quite special. Downloading this particular Celebi will trigger an event in Pokémon Heart Gold & Soul Silver known as the time-travel event. Celebi will also be used if transferred to Pokémon Black & White to obtain Zorua. Set your dates for this one as well, all you Poké-faithful as this might be the final event for the fourth generation titles (as of now anyway…).