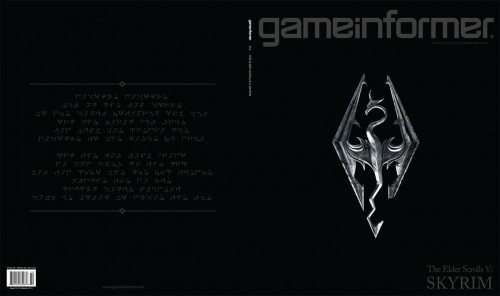 With only scant information about what The Elder Scrolls V: Skyrim will contain we have to take everything that we can get at this point. Thankfully Game Informer looks like they will be having a bit of new information coming in their February issue because they have just released their new cover. It shows an emblem of Skyrim which has been printed with an ultraviolet coating so that it will be a 3 dimensional look to the image rather than your standard print.

Also as you can see above the back of the cover contains something even more interesting. There is a strange language written in unknown characters that pertain to the story of Skyrim. They apparently relate to the trailer which was released when the game was first announced, but currently no one knows the answer. Some point later today however the information may be revealed so check back later for more info.