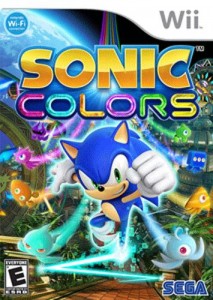 “Vivid Sound x Hybrid Colors” is the name of the new Sonic Colors original soundtrack. This soundtrack is available today to download from digital distribution on the Apple iTunes Store in North America, EU & Japan.

The album features all 82 tracks from the game, including the opening theme “Reach For The Stars” with vocals by Cash Cash, a pop-rock band from New Jersey, USA, and “Speak With Your Heart”, the distinctive ending theme.

Orchestral themes recorded in Amsterdam and in-game music are also featured, showcasing an exciting hybrid of analog and electronic tracks.

“Vivid Sound x Hybrid Colors” allows the listener to enjoy music tracks which illustrate the speed and colorful sound reminiscent of the “Color Power” action from the game.

Yeah… most of that was just the press release doing the talking for me… but you get the idea!

Tracks are available via Wave Master Entertainment on the iTunes store.