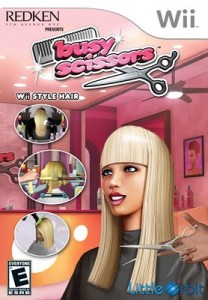 REDKEN Busy Scissors is a casual hairstyling game which aims to put you in the frivolous role of a hairdresser. It looks like it will utilise the Wii Remote pointer or the DS’s touch screen depending on the version of the game you are playing – shampooing, cutting, colouring and blow drying are the order of the day here. Also, because the game has a sponsor ship deal, expect official REDKEN salon haircare products, including various branded styling implements to make an appearance.

At the moment, it’s looking a bit like the Trauma Center games, but instead of removing a steel girder protruding through a man’s chest, you’ll be preparing Sally for a date with a quick cut ‘n’ colour.