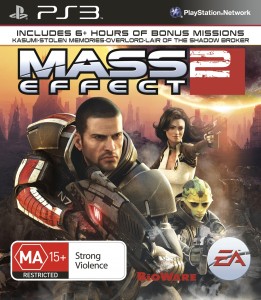 The award winning Mass Effect 2 has finally made its way to the PlayStation 3, and even better than that, it has made its way to store shelves in Australia and New Zealand. Bioware’s Mass Effect 2 provides a great jump in point for those new to the Mass Effect series to enter without having to worry about missing out on much of the story line.

Stepping into the boots of Commander Shepard, players must assemble and command a crew of specialists in the hopes of saving the galaxy. The only problem is that the chances of them surviving this mission are slim to none. It helps that along with the standard game content that comes with Mass Effect 2, players will also receive all of the additional DLC completely free of charge. Kasumi – Stolen Memories, Overlord, and Lair of the Shadow Broker all come with purchase and add over six hours of extra content. I don’t know what you are waiting for, especially considering Mass Effect 2 has never looked better now that it has arrived on the PS3.

Gamers Opt Out fight back against EULAs