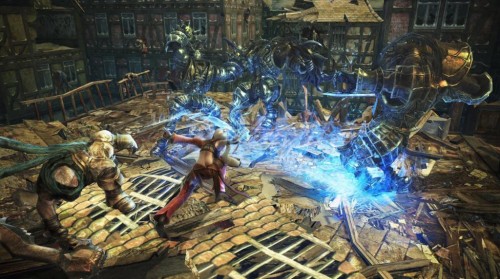 It’s official, the contract has been signed and Knights Contract is all set for a release next month on February 22nd on the Playstation 3 and Xbox 360. Namco Bandai announced today that Knights Contract has officially been polished enough for its release date in under a month. The relatively close time to release for the golden finish can be seen as a good sign that lots of care was taken to fix any possible bugs that may have appeared if the game was left to sit for a long time before release.

Now Knights Contract will be placing players in the middle of the 17th century and in the immortal boots of Heinrich. Heinrich is teamed together with Gretchen, a witch who he himself executed, and must fight against the evil that has taken over the land. Players can expect fast paced battles full of explosive magic and plenty of blood flying around as Heinrich tears through opponents with Gretchen’s support.