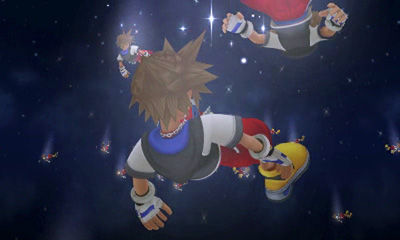 Perhaps looking to take the award for the most D’s in a title Square Enix has revealed the full name of their upcoming 3DS game revolving around Kingdom Hearts. Titled Kingdom Hearts 3D: Dream Drop Distance, KH3DDDD, so there we have it. But besides this announcement they have also released a trailer which shows off some very hectic battle scenes and fast paced actions.

We see both Sora and Riku controllable during this trailer and a number of recognizable icons both from Disney and Square Enix. There has yet to be any announcement unfortunately for KH3DDDD outside of Japan however, but considering every release of a Kingdom Hearts game has been making its way to the West so far it is easy to assume that this one will as well.