So last night Sony had this big event to reveal the totally unknown PSP2 under codename NGP, Next Generation Portable, to a world of completely shocked gamers (laugh).  Seriously though, Sony finally revealed the damn thing.  After YEARS of rumors, most of which were accurate mind you (you should get on that Sony), Sony finally decided it was time to stop playing dumb and announce their next platform to dominate the portable market.

For those who aren’t in the know, the NGP (PSP2 if you don’t care about corporate buzzwords) sports a 5 inch OLED screen, 3G +Wi-Fi capability, touch panel, front + rear camera and is able to produce graphics comparable to the PS3.  This should come as no surprise since Sony has always been the hardware giant of the gaming industry, proving time and time again to “set the standard” for what current gen games should look like and what the hardware should do (their support of 3rd party developers and by association adequate software remains to be seen).

So this is all fine and dandy.  There’s a new portable coming to town and it can display pretty things, stalk your friends and bring about the robot apocalypse.  If you haven’t heard any of this yet and are still shaking with schoolgirl excitement, get a hold of yourself because we need to talk about the price.  Sony has a bit of a reputation with its hardware being…shall we say “expensive”?  No, that’s a common term and sounds like it’s only going to be 10 or 15 dollars above what you are willing to pay.  Let’s use exorbitantly priced.  Yeah, that sounds nice.  That makes it sound like you will need to sell your house just for a chance to hold the precious handheld and if Gamestop has anything to say about it, appropriately so.

For all of that modern tech and glam, you gotta expect this thing to cost you an arm and a leg.  The PS3 was $600 at launch and the PSP Go was $250 at launch.  This is actually a sound marketing tactic.  The idea is that when you first reveal a new product to the world you want to make sure that they associate it with a high price tag, i.e. “value”.  This value will stick in their head, regardless of how much it actually costs to produce and is actually worth.  Early adopters will drop the cash on it which only means insane profit while the majority of the common public will wait until it is more reasonably priced.  Down the road when you inevitably drop the price to a more reasonable level, consumers will think, “Oh wow, that thing used to cost SO much, but now I can afford it!  I better go buy it now because I like nice things.”  It essentially makes the buyer associate the product with a higher-than-actual value so that when they can afford it they are more likely to buy it.  This means slow sales at the start but fairly constant and desirable sales as the product matures as opposed to the strong initial sales with waning sales as the product’s lifetime goes on.

So you are probably wondering now why this article’s headline is talking about Gamestop.  Sony obviously doesn’t want to reveal the price JUST yet.  They only revealed the PSP2 last night.  They want consumers to continue buzzing about it for a while.  If they revealed the high price tag immediately, people would lose their excitement and instead carry the disappointing feeling of anguish knowing you won’t be able/want to afford it.  This didn’t stop Gamestop, however.  Known for procuring as much money from you as possible while ensuring that the developers get exponentially less than they deserve a la used game sales, the corporate giant has put up a price to pre-order the handheld even though Sony hasn’t given ANY indication as to what it will cost aside from saying it won’t be $600.  This means that the price is a place holder and is not indicative of the actual price when it is revealed.

You ready for it?  $999.  That’s NINE HUNDRED AND NINETY NINE DOLLARS. 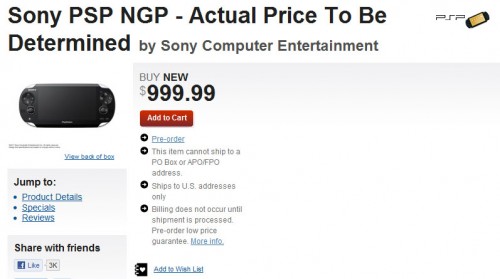 Actually, no it isn’t.  Because we aren’t children and are able to comprehend what the marketing ploy of labeling something as “.99” or in this case “999” actually means “1.00 plus tax” or in this case “$1,000 plus tax”.  I’ll let you take that all in for a moment.  Done?  Good.  Thankfully, it is highly unlikely that this is anywhere near the appropriate price.  If you are filthy rich and like just spending your money as frivolously as possible because you like making others feel bad and cry and actually decide to take Gamestop up on this offer, you can rest well knowing that once the real price is revealed Gamestop will refund you the difference of what you surely overpayed.  More (or less, depending on what your views are) important is that this hilarious little stunt only serves to embed Gamestop further in the pit of corporate greed that it has so easily fallen into.  A mere second or two of rational thought would have told the Gamestop employee who put up this pre-order that this will likely scare away a handful of uninformed but potential buyers and associate Gamestop with a laughable magnitude of inadequacy.  But no, Gamestop decided to bravely throw caution to the wind as if to say, “The hell with it.  This thing will probably be expensive so I’m just going to post some arbitrary and most likely inaccurate number that I perceive as “big””

So good for you Gamestop, you sly, sad bastards.  You keep thinking this will go for $999, let’s see how that turns out for you.  For the future, try and put some thought into what you do.  On second though, keep doing what you are doing.  I’ll give you until the next console generation until you implode in on your own incompetency.