UTV True Games have recently announced new information on their latest MMORPG offering, Faxion Online.
In Faxion Online players partake in an epic war between the forces of Heaven and the forces of Hell. The battles of this war take place within the Seven Deadly Zones, each named after a particular sin – Greed, Lust, Envy, Pride, Wrath, Gluttony and Sloth.

Faxion online differs from the typical MMORPG in that players will be spending little to no time grinding and the majority of their time in persistent battles between players of the opposing faction. These battles, waged across the Seven Deadly Sins, typically shape the material world of beyond. The mechanics of this game hope to emphasize guild involvement and player co-operation to achieve a satisfactory victory over the opposing forces.

Like most MMO’s you will be required to select a class during the character creation stage, however you are free to multi-class at any point during the game should you have sufficient points to buy a rank in a different tree. Faxion Online offers 3 classes (each changing their title based on the faction you choose) which are –

Fighter (Crusader, Reaver): These appear to be your typical in-your-face fighting class, with their heavy armour and typical weaponry, and should be placed at the front of the line during a battle.

Mage (Diviner, Occultist): Magi would be the main damage dealer of your party, being able to cast spells from a distance to devastate the opposing faction. They’d probably be best played from a distance to the opponent so as to not get disrupted and killed.

Healer (Guardian, Zealot): Healing class, keeps the team alive during battle. Probably the most important unit, so try and keep it alive.

With this game, should you want to, you can also multi-task to one other class plus your main class or even all three. This is likely to have plenty of benefits to players, imagine a Mage in heavy armour or a Fighter with healing abilities. What if you wanted all three? You can do it! Provided you have enough points to purchase a rank in that class. Of course there are drawbacks to doing this as a point in a second class costs more than a point in a first class and a point in a third class will cost more than a point in a second. So it all comes down to the build you want to play as, as well as your own preferred playing style.

For more information, check out the Faxion Homepage. 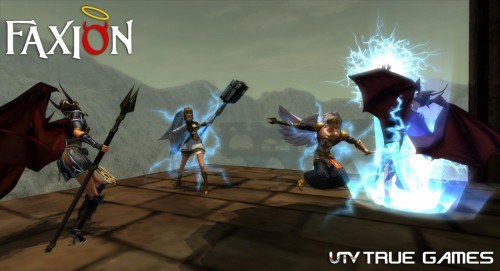