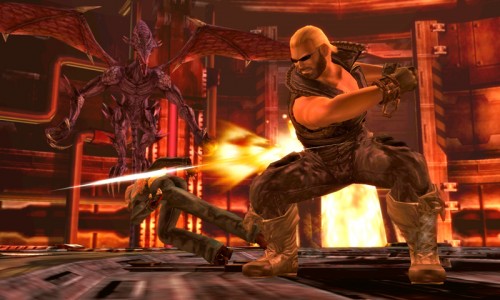 Not so long ago Nintendo took a chance on a studio to make their next big entry in the Metroid franchise.  That studio was Team Ninja.  Some may have been a bit bewildered at the time, I certainly was.  The Metroid franchise’s latest entry was in the hands of a studio who is best known for making a 2D style fighting game?   Blasphemy!  In spite of the odd match up, Team Ninja did a wonderful job with Metroid.  Now they are back to making Dead or Alive, more specifically Dead or Alive Dimensions for 3DS.  Hmm…a studio handles one of Nintendo’s most established franchises and now is making the game they are best at making on Nintendo’s new platform…I smell an opportunity here.  Apparently so does Team Ninja because that opportunity was seized.

There is a Metroid tie-in in Dead or Alive Dimensions.  One of the more memorable areas from Other M, the area where you fight the series’ iconic, reptilian villain Ridley.  On this stage, during battle, Ridley can swoop in and take hold of one of the fighters, viciously scraping them against the side wall and then shooting a fireball at them, causing massive damage.  Check the trailer below to see it in action.  Also at the end of the trailer we get to see a little cameo from our favorite heroine in orange body armor, Samus Aran.  She rolls in to drop a power bomb.  Apparently this is a special unlockable within the game that the developers want to keep a secret for now.  Make sure to keep an eye or ear out for more info on this in the future.  Also don’t forget to check out their official site for news and info as it gets released.