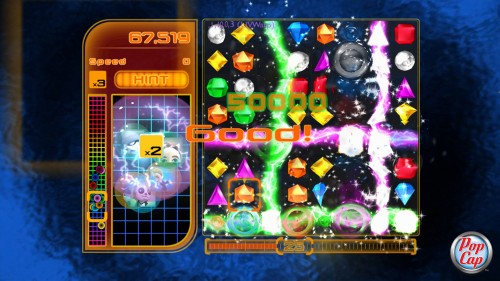 Bejeweled Blitz the popular Facebook game spin off from the Bejeweled series by Popcap Games, is making a move to the console. The Facebook game is insanely popular hitting an average of 11,373,722 mouthy users thanks to its fresh takes on Bejeweled, most notably a Bejeweled Blitz game only last for 60 seconds.

Bejeweled Blitz Live for the XBLA, set to be released as a part of upcoming Xbox Live Arcade House Party event, will deliver the same fast paced action as seen in the popular Facebook variant but in crystal-clear, high-definition graphics. New game modes including 16-player simultaneous Party mode and head-to-head Battle mode over live. Also included are the real-time leaderboards and the new Friendscore, providing up-to-the-minute scores with the latter a combination of your score with the scores of your Xbox live friends for the highest weekly and all-time totals.

Bejeweled Blitz Live will hit the XBLA soon in Q1, 2011