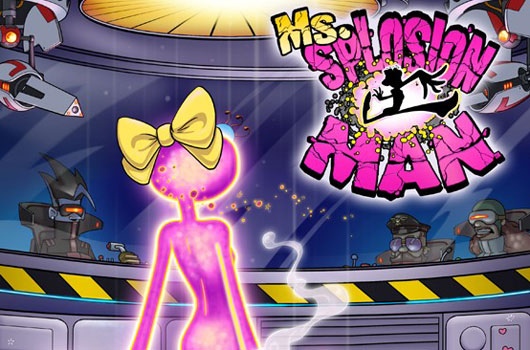 Splosion Man is simply an incredible game, and if you still don’t have it even after the most recent sale at only 160MSP you probably don’t play video games. The sale was perfectly timed in fact and coincided perfectly with Twisted Pixel’s announcement of a sequel to Splosion Man: Ms. Splosion Man!

Ms. Splosion Man accidentally created in the labs of Big Science after the scientists captured of the Splosion Man, and as the press release states: “Even if some sort of newer, stronger, better threat were created, our newest security measures and fiendish traps would be more than enough to contain it. We’ve made incredible advances in our technology over this past year…. Not that there would ever be a use for any of it.” So there is nothing to worry about, I am sure Ms. Splosion Man will be caught just as quickly, oh wait…

The press release continues: “everything has had functionality improvements and visual overhauls, and our company has expanded to some incredible new locations. It’s all pristine and beautiful…”

Big Science continued to reassure readers through the press release by stating, “What’s going to happen, some sort of freak accident in the after party that creates a “Ms. Splosion Man” mere seconds after Splosion Man’s capture? And then the Ms. Splosion Man goes on some monster tear in the fall of 2011? Yeah right.”

It seems to not have worked out too well. As you can see in this debut teaser trailer a new Sploding character has entered the scene to wreak havoc. Look  out for Ms. Splosion Man, who will be new, improved and sploding onto XBLA in fall 2011.

Be Iron Man in the new flying game for Playstation Home