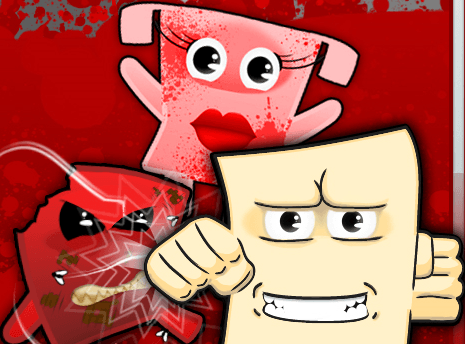 Now PETA has been known for plenty of different tactics in the past to get the word out about animal abuse and using animals as food, clothing, etc. But we have also seen them use flash games before to help advertise the fact that cooking with animals is cruel and gross when they made Mama Kills Animals in an attempt to ride the coat tails of the fact that Cooking Mama is extremely popular.

Now they are at it again with something they like to call Super Tofu Boy. This is quite literally a use of Super Meat Boy as it takes the platforming of Super Meat Boy and throw in a new storyline where Meat Boy is actually the enemy and kidnaps his ex-girlfriend Bandage Girl who is now going out with Tofu Boy. I’m not making this up.

Meat Boy is a vengeful, bloody cube of rotting animal flesh. And he smells. After a short-lived fling with Bandage Girl (sympathy dates, really), he became enraged when he was dumped for the tasty and satisfying Tofu Boy. Once Bandage Girl slept with Tofu Boy and saw all that he had to offer, it was bye-bye beef, hello bean curd. Enraged by his loss and lack of ability to compete with the badass that is Tofu Boy, Meat Boy snapped and kidnapped Bandage Girl-because if he can’t have her, no one will.

Super Tofu Boy is available for download for free on PETA’s website and is able to be played on Mac and PC. The game itself consists of ten different levels so it is rather short and is full of vegan sayings and vegetarian phrases that try to show how meat is the devil and Tofu is the way to go. It’ll be interesting to see what Team Meat will think of Tofu Boy.