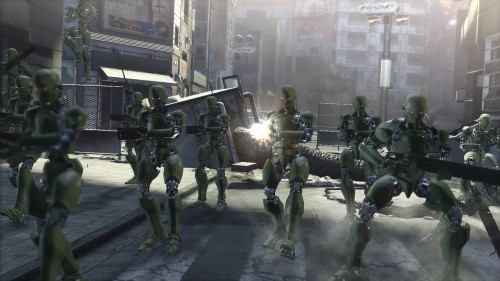 With Yakuza’s Creator, Toshihiro Nagoshi rumored to be working on some sort of game outside of the Yakuza franchise there has been much speculation as to what he could be involved in, if he was involved in anything at all. But let all that speculation fall by the wayside because today Sega announced that they are working on a new squad based shooter with Nagoshi called Binary Domain.

With this announcement they have included a trailer for the game which you can watch below. From the way it looks there will be at least three human players to choose from or at least be involved in the team. The story itself looks like it will place players inside of Tokyo in the year 2080 and looks to take place after some sort of robot rebellion as all enemies seen are robotic.

Toshihiro Nagoshi had a bit to say about the game himself:

“When you hear sci-fi you may think of cold, clinical environments. With Binary Domain I wanted to combine this with a deep human drama. The keyword we have in mind for this project is ‘Life’.

One of the key elements of this is the pursuit of strong and differentiated human AND robot AI. Aiming to have the world’s best AI was essential to bring a true realisation of the concept of life to the players, through the story and the action within the gameplay. The inclusion of online modes has allowed us to transform the game from a mere battle field into a field of survival.

There has been no release date set at all so one can only speculate as to when it may be released but we do know that it will be seeing a worldwide release on both the Xbox 360 and the PS3. And does that last sentence mean that we may see full online squad co-op modes?