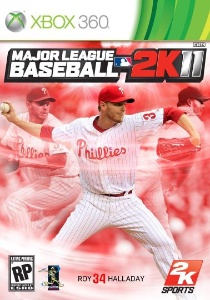 Greg Thomas, senior vice president of sports development for 2K says, “In the ‘Year of the Pitcher’, Roy has truly distinguished himself as the best pitcher in baseball.  Between his dominating season that included baseball’s 20th perfect game, and his exciting performance during the postseason, we believe there is no player more worthy of representing our revolutionary pitching mechanic on the cover of Major League Baseball 2K11 than Roy Halladay.”