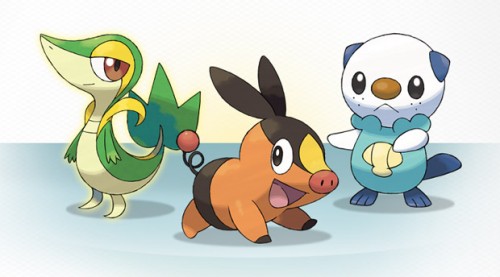 Now in Japan Pokemon Black and White have already been out for two months now and everyone has grown accustomed to the starter Pokemon that you see above. The names that they were given in the Japanese release of the game was Tsutarja, Pokabu, and Mijumaru. However that won’t be the case when the game is brought overseas to everyone outside of Japan.

Instead these starter Pokemon will have their names changed entirely. Rather than Tsutarja we have Snivy, instead of Pokabu we have Tepig, and there will not be a Mijumaru but a Oshawott. But that isn’t the only thing that is getting a name change in the end. The region that the new Pokemon adventures will be taking place in will be called Unova instead of Isshu.

While fans of the original names can easily give their starter Pokemon nicknames that match their old names from Japan but I doubt many people will be to worried about the name changes, as some of them match their Pokemon appearance better. No news of a specific release date yet other than sometime next year, but at least we know now why our starter Pokemon won’t be called the same thing as we thought they would when we do have a chance to play the game. You can even get a little preview of the Starters’ stats on Pokemon Black & White’s official website.