Deus Ex is what dreams are made of. Edios Montreal are making those dreams come true, with Deus Ex:Human Revolution a reboot of the seminal Deus Ex; single best video game of the last(previous) decade.

The following video is the 3rd to be released and gives away a ton of dirt on some small details, including what the HUD and menus will look like and alot of the upgrades and modifications. This is one trailer you will want to pause and watch over and over again.

For those in the know on Deus Ex 2: the radial menu is back, but sporting 10s’ of weapons slots, as well it would appear that weapons can be upgraded and modded. There is a loving mix of old and new here: including the return of being able to hack computers and effect the control of both the camera system and the robots to turn on enemies. EMP grenades can be seen and they are virtually identical to the original game. Main-man Adam Jenson upgrades his strength before shifting that box, but other upgrades include sight and that every so-sexy invisibility.

There is a lot to see, so enough rambling and more video!

(Then go and check out the prior two CGI videos) 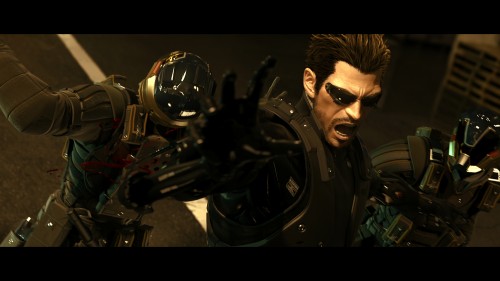