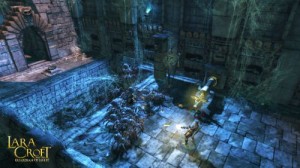 Hey, you remember that one game that released in August?  It had this female character that found treasure and fought monsters?  Oh yea, Lara Croft and the Guardian of Light was the game.  The patch and free DLC has already found its path to the Xbox Live Marketplace and Crystal Dynamics recently announced that the patch is ready to download on your Playstation 3 and PC via Steam.  So put those magic rabbits working in your ISP to work and hop on over to receive your patch and free downloadable content.