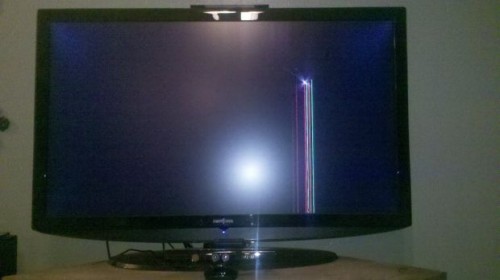 The Kinect just released to the public yesterday but there has already been a fatality as far as TVs are concerned. Sure we have heard the stories of wrist straps on Wii remotes breaking and smashing expensive TVs. But I’m sure that it took more than a day for that to happen at least. Now how does one break their TV when the only way to control the Kinect is with your own body? Did he kick his TV? Kick something into his TV? Well that is partly true considering he did hit something into his TV.

Phil Villarreal happened to be playing Kinect Sports Volleyball at 1:30 AM last night and while he was playing, he did the motion for spiking the ball. Only problem is there was a ceiling fan right above his head with a dangling chain and weight. While he may have landed a great hit in his volleyball game he also spiked on of these weights right into his TV screen and put a sizable break in it. Though it isn’t the glass smashing spectacular that some TVs do when they break, it does cry an LCD rainbow.

Looks like we should be careful about our ceiling fans when we are playing Kinect from now on. Or for that matter hitting anything in general towards our TVs during an intense Kinect gaming session.

Source: Because I Told You So