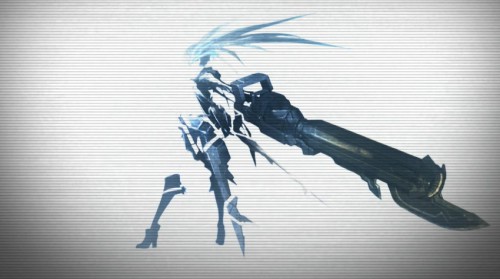 Turns out the rumors were correct, Imageepoch was planning on revealing a Black Rock Shooter game, which is currently very imaginatively being called Black Rock Shooter: The Game. All sarcastic criticisms aside the game was announced today in Japan at Imageepoch’s press conference. The game will be coming to the PSP sometime in the Summer of 2011 in Japan. No news of a localized version of course because it was just announced though fans can start hoping.

But what exactly will Black Rock Shooter: The Game entail? Well it will place players on Earth in 2051 where an alien attack has devastated the Earth. Now twelve different survivors will join together to destroy the invaders that have destroyed their home. The game itself is being described as a third person shooter with a mix of RPG elements thrown in.

Some recognizable names are working on the game from what we heard at Imageepoch’s conference, such as Kazushige Nojima as Scenario Writer and Kazuya Niinou as the game’s Director. Nojima was previously the scenario writer for FFVII and Glory of Heracles, while Niinou has worked on Last Ranker in the past.

PSP Go is getting an international price drop