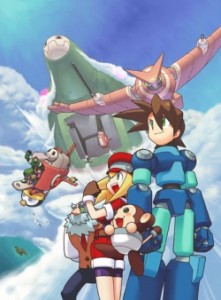 At the “World of Capcom” panel at New York Comic Con, Keiji Inafune the creator of Mega Man, revealed to the audience that Mega Man Legends 3 will be developed with the fans help. Developer room, which is a whole new section of Capcom-Unity, will allow fans to vote and comment on what goes into the game. The first chance to vote, is on the design of the heroine of the game. This is quite a nice feature Capcom has and I might just vote because I am excited for the game.