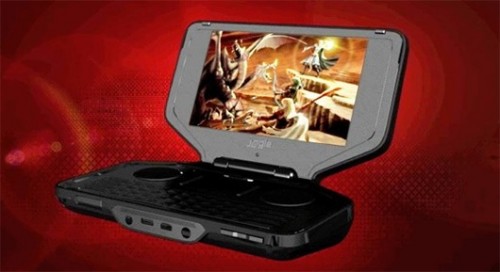 Who wants a go?

Do we really need to encourage MMO players to play outside of their homes? Well according to Panasonic, portable online gaming is indeed a market worth targeting. “The jungle” as officially named by Panasonic has the tag line “new mobile device concept designed specifically for online gamers,” a “mean little machine features a kick arse display, touch pad, keyboard, and other gaming controls”

The jungle hopes to play host to a mix of content and experiences. It’s compatible with browser based MMO’s, like for example Runescape or something as childish as say Club Penguin. The device has a small touch pad and D-pad, including a full keyboard, but obviously quite compact in size. It’s rumoured to run on Linux (oh shii), which could complicates things as most games are developed on different OS and would need to be ported over. For example World of Warcraft would need to be ported, which caters for a giant slice of the market.

No details are confirmed, however it’s rumoured to have Wifi, 3G capabilities and possibly a HDMI port. Reports also indicate the screen resolution is quite impressive, which could mean a quick little processor inside. As the device has just been announced, no pricing or release details have been confirmed. However judging by the reports of the screen resolution and assumed processing power that goes with, we could be looking at a high price tag.

At first glance the device looks like a different version of the GBA; however it scores points for portability. It may be a good thing pulling hardcore MMO gamers out of their apartments, or it may scare the general public. Who knows? But one thing is for sure, Panasonic are taking a brave and bold step with this handheld. The failure of the 3DO must be well behind them. But the question remains if developers and publishers will back it. Check out the video from the official site, more details as they’re confirmed.