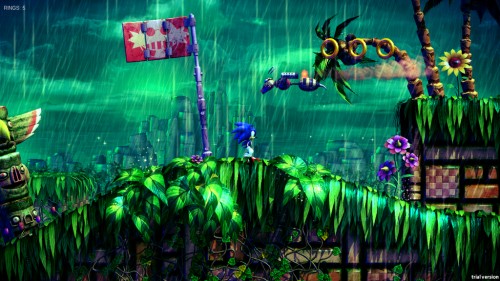 Any sonic fans out there?  I’m sure there are a few of you.  With the recent release of Sonic 4, you should be quite pleased.  Though some of you may have been expecting a bit more.  After all, it has been over a decade since the last, honest-to-goodness, classic sonic game.  This isn’t to say the series hasn’t had a few hits since that time, I genuinely enjoy the Sonic Adventure series to varying degrees, but you know that’s not what I mean.  I’m talking about how the series has fallen into almost unforgivable disrepair, going so far as to give Sonic a sword, have him have a romantic moment with a human girl and even giving Shadow guns, all in an attempt to pander to the franchise’s “intended” demographic, that which consists of 8-13 year olds.

But enough about stupid decisions!  Sonic 4 was made as a response to the “hardcore” gamer’s plea to have Sonic return to form, return to what made it so great and beloved in the first place.  Some of you may be happy with that, though some may find it a bit lacking.  After all, as the premiere reboot of the franchise, you would expect nothing less than absolute perfection.  If you find yourself in this position, look no further than here.  This is a truly amazing fan made sonic game, with better graphics and physics than that of Sonic 4.  Only a demo is available currently, but I urge you to try it out.  The level of care and detail that has gone into this is staggering for a fan made endeavor.  Sega, take note.  This is how you reboot a franchise.