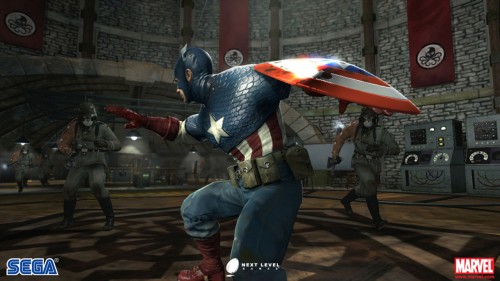 Sega has confirmed today that they are working on Captain America: Super Solider that is due in 2011 along with the feature film that is due for release next year. Marvel has also partnered with Sega for their Thor adaptation, so it is no surprise that they went with Sega again for Captain America. The developing team is Next Level Games, famous for Punch Out!! And Spider Man: Friend or Foe. Not only will the movie be hitting the silver screen, the game will be playable for practically every system; the PS3, 360, Wii, PSP, and DS.

The storyline for the game will be written by Christos Gage and will take place within the same world that the movie does. Christos Gage wrote Marvel’s Avenger: The Initiative, Civil War: House of M, and many other different titles so expect a true to comic book fashion storyline.

The game itself is planned on being a third person action game during World War II. During the war Captain America will be doing battle against Red Skull within a castle that has been converted into a Hydra Base. According to Sega the game will have “highly athletic combat system with fluid platforming and a highly tuned suite of shield attacks taking out multiple enemies at once, deflecting incoming fire back at enemies, solving puzzles, and scaling walls.”