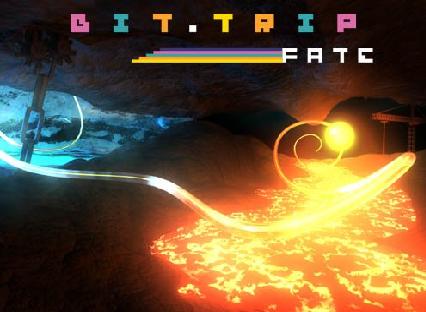 One of the most anticipated WiiWare titles of the year is about to land on the console October 25th. Aksys Game’s BIT.TRIP FATE continues the series with the rhythmic challenges of CommanderVideo with the solid gameplay experience that fans have learned to expect over the years.

If you have never heard of the series as of yet, or what to expect in the newest entry, here is a bit of information from the official press release:

BIT.TRIP FATE is an on-rails side-scrolling shoot-‘em-up that has CommanderVideo riding the vibe to discover his fate. CommanderVideo will need a little help from the friends he made in BIT.TRIP RUNNER to thwart the Mingrawn Timbletot who has mutated the world into an ugly technological nightmare.

Join forces with the Junior Melchkin, CommandgirlVideo and others to increase CommanderVideo’s power and save the world. Whether you play in single-player or team up with a co-pilot, you’ll have to keep a steady hand to navigate the vibe and aim your blasters at the twisted souls out to destroy you.

The icing of the BIT.TRIP CAKE (I know, bad pun) is that BIT.TRIP FATE will be only 800 Nintendo Points upon release next Monday. For more information you can check out www.aksysgames.com.