The Ball is an indie adventure puzzle game that you probably hadn’t heard of. I’ll be glad to fix that. The Ball started out as a Unreal Tournament 3 mod and moved up to become an actual product.

To set up the story, you take control of an archeologist in Mexico. Some things go wrong and you’re now stuck in an underground cave with no choice but to move forward, eventually stumbling upon an ancient artifact called “The Ball”. Venturing deeper into the cave, you quickly realize that you’ve stumbled upon an ancient civilization. These ancient ruins are filled with puzzles and angry mummies.

To solve just about every puzzle you’ll use the Ball – a big and detailed sphere. Pressing switches is only part of the deal as physics plays a huge part in the puzzle solving. I’ve only played about half of the game and I’ve been impressed with every puzzle so far – each one unique and fun to solve. 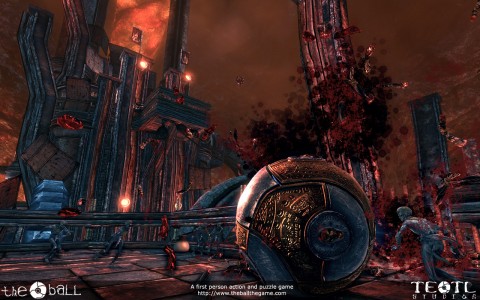 Initially I was worried about how the ball would control. You’re equipped with a hammer gun which punches the ball forward. Alternatively you can suck the ball towards you if it strays too far. The levels are designed well enough so it’s never a hassle to get the Ball from point A to B. The atmosphere in the levels successfully creates a mysterious and creepy environments as you venture through underground temples and caverns. The game looks absolutely wonderful running on the Unreal Engine, especially with all the settings turned up.

You usually don’t find combat in a puzzle game such at this but The Ball certainly does. The combat is fairly simplistic since you only have the Ball for protection. To kill anything, you’ll have to punch the Ball their way and run them over with it. Most combat scenarios are hectic since you’ll have about 20 mummies rushing you all at once, making is very satisfying when the Ball mows them down.

The Ball is one of those games where you need to see it in action to understand why it’s fun. The Ball will be released on PC in October.