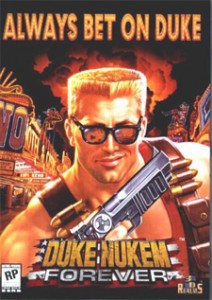 Before people actually got to play the game, they were sat in a room where Randy Pitchford, President at Gearbox, explained why Duke Nukem Forever still exists and why they’re taking on such a project. Pitchford told the group that he owes Duke his career, joining 3D Realms for the development of Duke Nukem 3D. Pitchford said he couldn’t let Duke die, so being able to pick up Forever was an obvious choice for him. According to Pitchford, Duke Nukem Forever is currently in the polishing stages and is set for a 2011 release.

The demo doesn’t waste any time getting to the gritty humor that Duke Nukem is known for. You’re given a quick controls tutorial which involves peeing into a urinal. Pressing the right trigger starts the flow of urine, the right stick is used to aim, and whenever you feel you’ve made Duke pee enough, the X button finishes things up. So there you have it, an interactive urinating sequence in Duke Nukem Forever. Leaving the urinal, more interactive items are found throughout the bathroom, such as a working soap dispenser, a flushing toilet, working mirrors, and a white board where you can draw and erase whatever you please. 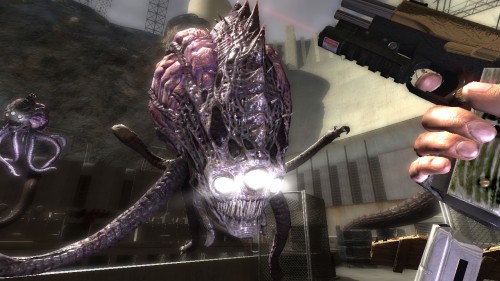 Leaving the bathroom you’ll run around some locker rooms and hallways, a boss is encountered, and if you’ve been keeping up with Duke Nukem you’ll remember this fight from Episode 3 in Duke Nukem 3D. Duke is faced by a giant Cycloid on a football field and the only way to take it down is with a rocket launcher that holds only 69 rockets. Support from above will drop more rockets when you run low. When the Cycloid’s health bar is depleted, a prompt will appear by the boss, allowing Duke to finish the fight with a brutal finisher – grabbing its tongue and kicking it through the field goal posts. The scene then pulls out revealing a TV, with Duke Nukem Forever on it, and Duke sitting in a chair in his mansion receiving some sort of oral service from two of his lady friends.

The next level in the demo is revealed as “Level 15” and starts off with a short driving sequence. When Duke runs out of gas, he hops out and continues on foot. Duke quickly runs into some Pig Cops. After shooting a couple dead, you’re able to find a variety of weapons, such as the shrink ray, rail gun, and the classic shotgun. After shooting some more Pig Cops a ship flies down and shoots Duke, sending him to the ground, but not without Duke sending up a middle finger first, ending the demo.

So here we are with a 12 year old Duke Nukem game that feels good to play and nails the humor that any fan would expect from a game like this. It’s absolutely crazy that Duke Nukem Forever is due to come out in 2011, but you know what they say, always bet on Duke. You can expect Duke Nukem Forever on Xbox 360, Playstation 3, and PC next year.