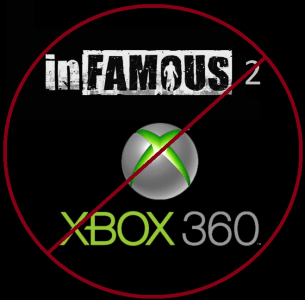 I’m a big X-Box fan. I consider the console to be very well balanced in terms of design, tech specs and price; it offers great visuals and foremost has HUGE fun-having potential which in my opinion is exploited very well in most of the games and through the online community. Of course I’m not ignorant and I know it has many bad parts (X-Box Live Gold Fee, the infamous RROD, to name a couple) and I am fully aware that the PS3 is capable of delivering better graphics and processing performances. There is an entire online polemic regarding the subject and it’s not my desire to comment on these things in the present article.

However, there has been a recent interview with Chris Zimmerman, Sucker Punch’s Development Director, which caught my attention. He states the following:

“There’s just more processing power on the PS3. If you look at games like Uncharted 2 that’s a game that you actually can’t do on X-Box no matter how clever you are. InFamous 2 is going to be the same way. You’ll look at it and see that there’s no way we could have done this game on 360. In technical terms the biggest thing that we’ve done is migrate a much larger part of our code to run on the SPUs.”

“The PS3 has this elaborate architecture where there’s a whole bunch of different places you can have your code run and we had it all running in the slow part.”

Now, I’m not implying anything but I think one could make many friends by trashing other’s competition like that, don’t you think?

All-in-all I guess that subtleties matter less in this case, what is most important is that from what it looks like it’s a real certainty that X-Box gamers will be deprived of inFamous 2…hmm…makes me want to get a PS3…but wait, Crysis 2 is coming out for X-Box! So either they should take lessons from Crytek or their game will actually be better than this one. I guess we’ll just have to wait and see!

inFamous 2: Festival of Blood announced for October as standalone release