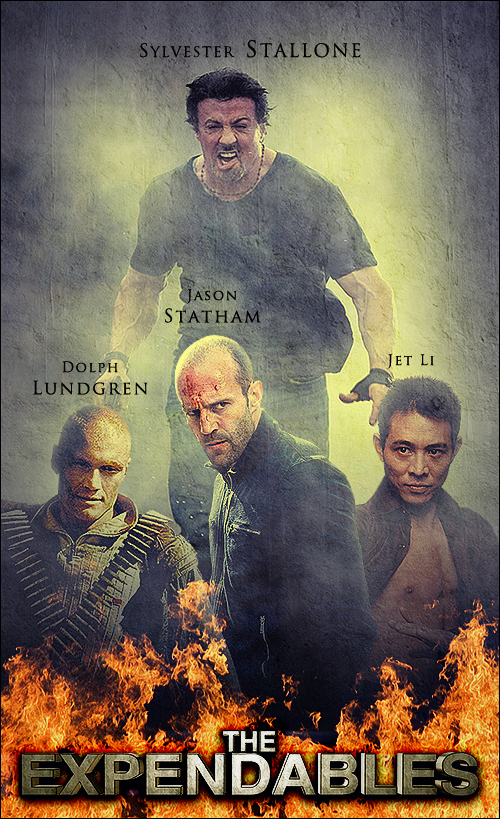 Ever get the feeling that the movie you just watched was created with one single purpose. That purpose being, to create a movie that orbits a specific actor? Well, if you thought that was the purpose before, take a look at this film.

The expendables is an upcoming movie, set to release this summer, about a bunch of mercenaries. Who are playing these mercenaries? The top action movie actors out there. This movie screams for attention from the sheer mass of “tough guys” in it.

Just take a look at the cast.
The Actor – who they are in the movie

Quite an intimidating cast and anyone can pull out at least one actor they know from that list, but in the words of the wise MasterAbbott “it’s going to be epic or an epic #FAIL”.

I just hope it will have action, explosions, a hot girl, and lots of killing. A story? No, those are over rated! I don’t need a story!

Lets take a look at some other comments on the trailer.

“Four and a half man…not funny…IT’S MORE LIKE JET LI EQUALS FOUR MEN AND THE OTHER FOUR ADDS UP TO﻿ A HALF. ” ~ vangstr6

“so the whole movie is﻿ about a bunch of ex-action hero old farts ? ” ~ worstalentscout

I will let cangriman0101 sum it up for everyone:

Reaction the first time I saw the trailer:
“Oh nice, the﻿ guy from Transporter…
with the guy from The Wrestler this ****ing awesome…
the german guy from Rocky! this is great…
Stone Cold Austin? God does exist…
the guy from UFC! yeah!…
Jet Li???!!!! *(Recanted)* YEAH!…
Bruce ****ing Willis…
is that Stallone and Arnold Schwarzenegger??”
*Head Explodes*