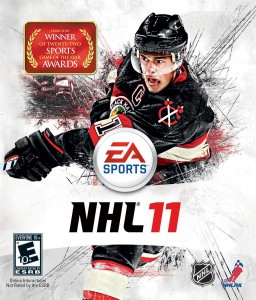 Looks like the Chicago Blackhawks are getting love from all kinds of markets this year. NHL 2010 featured Right Wing Patrick Kane, they win the Stanley Cup this year, and now Captain Jonathan Toews is now going to be featured on NHL 11’s cover.

This is the first time that any team has received two players back to back on an NHL game.  Not only that but Toews will be the featured cover player for all editions and regional games.  Toews was one of the top Blackhawks players of the year and watching him play on the ice as a Chicagoan was one of the highlights over their Stanley Cup run.

Toews is also the winner of the Conn Smythe Trophy which is the name of the trophy provided to the MVP of the playoffs.  With team members Patrick Sharp, Patrick Kane, Dustin Byfuglien, to name just a few they were a dominating force this year.

But more on the actual game, as it will feature the teams from the Canadian Hockey League as well as the National Hockey League, broken sticks which unfortunately happen quite often in a real game, new face off systems and new physics.

One thing that would be interesting is if the players could end up losing their teeth just like Duncan Keith did during the Semi-Finals this year. Will playoff beards be included in Season Mode as well?

Catch Toews and your other favorite teams this September for the Xbox 360 and the PS3.