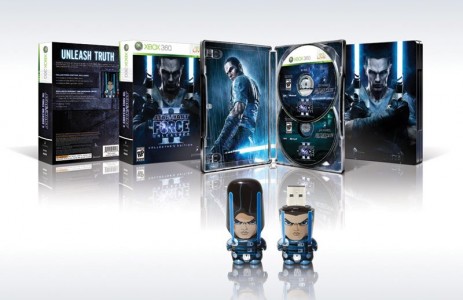 LucasArts has unveiled the collector’s edition for their upcoming sequel Star Wars: The Force Unleashed 2. It will be arriving on shelves the same time as the normal edition on October 26th and will cost $80 US on either the PS3 or the Xbox 360. It will include the following additions, which are quite a few to be honest:

The challenge mode levels, character skin, and lightsaber crystal will definitely attract some fans of the series itself. But it also begs the question as if the levels will be available for download at a later time for those who didn’t pick up the C.E.? Plus the material rewards are definitely interesting with the unique Starkiller USB drive.