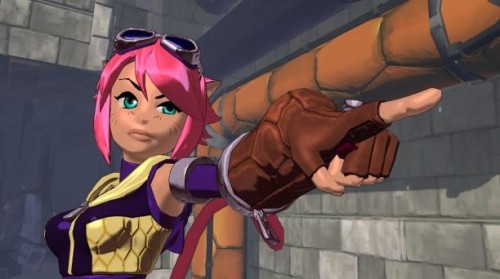 Fans of cat girls rejoice. Blade Kitten is being produced by Krome Studios and is an action-adventure sidescrolling game that has been based off of the popular webcomic of the same name. It features a catgirl, sorry I mean Felion, protagonist named Kit Ballard and was created by Steve Stamatiadis.

The good news is that originally Blade Kitten was meant to be a PSN exclusive that was going to be separated into two parts. However this is no longer the case. Atari has picked up the game to be published and has announced that this side scrolling adventure game will be released for the PSN still, but also the XBLA, and PC. Expect some fighting cat girl action this September when the game is scheduled for release in one full set instead of two separate versions.

This news is epic to me. I’ve seen some rumblings here and there about Blade Kitten as the release date grew closer but was always disappointed that it was going to be an exclusive release. Now though with Atari’s acquisition of the publishing rights, everyone can enjoy Kit Ballard in Blade Kitten. I haven’t followed the webcomic, but I am currently reading it as you read this article and definitely would recommend it to anyone who enjoys some good action and comedy. Also if you are a fan of cat girls eh?