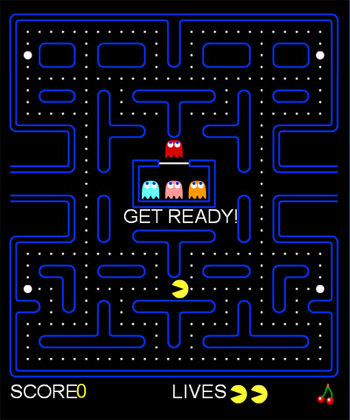 wakka wakka wakka wakka wakka … ahhh that’s the sounds of Mr Pac-Man munching away on those dots … but looks like on the 22nd May Pac-Man is going to be munching down on his 30th Anniversary Cake over at Swindon.  If your in the area make sure you check it out.  Have a read of the details below and location information.

Three unique events have been organised by the Museum of Computing in Swindon to mark this milestone, scheduled to take place on Saturday 22nd May 2010.

A specially constructed maze in Swindon town centre’s Wharf Green will be the venue for a unique ‘Human PAC-MAN’ event. Members of the public will be able to control a real-life PAC-MAN, trying to avoid the giant ghosts while collecting dots. It’s anyones guess what will happen when PAC-MAN grabs a ‘power pill’ and the tables are turned on the ghosts! Participants and onlookers will be able get a bird’s eye view of the action thanks to a video camera feeding Swindon’s twenty-five square metre ‘Big Screen’.

The ‘Big Screen’ will also be host to one of the largest versions of the original PAC-MAN game ever played and will be available to anybody who wants to relive their youth or try this classic game for the first time.

Simon Webb, Curator of the Museum of Computing, said: “PAC-MAN is the world’s most widely recognised games character. We couldn’t let this day pass without celebrating the 30th anniversary of this groundbreaking game, so we’re doing it in style. It’s going to be quite an event!”

Meanwhile, back at the Museum, people will be able to play variations of PAC-MAN on machines such as the Nintendo Game Cube, the original Game Boy, Sega Master System and many other retro game systems. The museum will also be staging a dedicated exhibition on the history of this social phenomenon, globally synonymous with 80s popular culture.

Museum volunteer Andy Romain said: “PAC-MAN was my first introduction to cocktail cabinet gaming. Sitting with a pint of coke and being drawn into the
neon-like maze world of this little yellow iconic character. Then I was thrilled when I was given a Grandstand handheld version of the game. He added: “PAC-MAN – the pill popping, ghost gulping figurehead of a gaming revolution!”

WHARF GREEN, Swindon Town Centre SN1 1LV
11:00 – 15:00
– Pac-Man as it’s never been seen before – on the Big Screen
– Human Pac-Man, come and have a go at controlling a real life Pac-Man
– Public participation is free

PAC-MAN is an arcade video game developed by Namco, a landmark in video game history. It was first released in Japan in 1980, a time when most video games were space ‘shoot-em-ups’. PAC-MAN was an instant success and became an icon of the popular culture and a social phenomenon. For more information visit the Namco website: www.namcogames.com