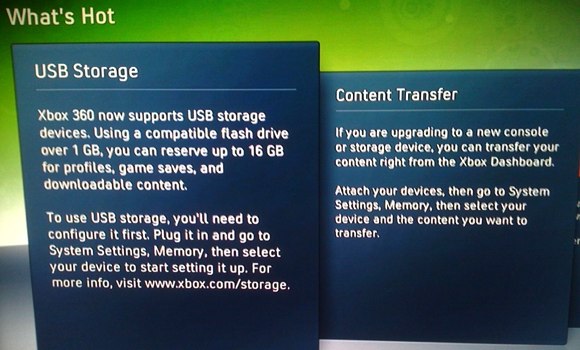 This morning the Xbox 360 Update for USB support went live. It isn’t that big of an update so should only take you about 15 minutes at most with a slow connection. If you have plans to play and are connected to the internet, i would suggest to turn on your Xbox early and start the update  so that it finishes and you can play.

As mentioned earlier, this update enables you to use a USB memory device in order to save games, files, and accounts. It is intended for flash drives with up to 16GB but no less then 1GB. Only 2 flash drives can be in your xbox at one time, allowing for a maximum of 32GB of memory added on. This does not mean; however, that you are only limited to 2 flash drives. As long as you have flash drives you can continually swap them out, even though I don’t see why you would have so many. Upon plugging in your flash drive, the Xbox 360 should auto detect it and then you can format the desired memory allocation by going to setting, memory, and selecting the right storage device.

This update will make memory cards obsolete, and Microsoft is releasing a specially branded Xbox 360 flash drive (8GB, and 16GB in size and set to release in May) that will already be formatted. These flash drives will also cause the update to take place if the Xbox 360 you plug them into does not already have the update. (Pretty much to enable the flash drives to work on Xbox 360s that do not have internet access)

What do you guys think? I think it is pretty sweet, I’m a Computer Science major so I’m always carrying at least two 16GB flash drives around with me. Ill probably format 3GB so I can hold my Xbox Live account and some save files for playing at friend’s houses.