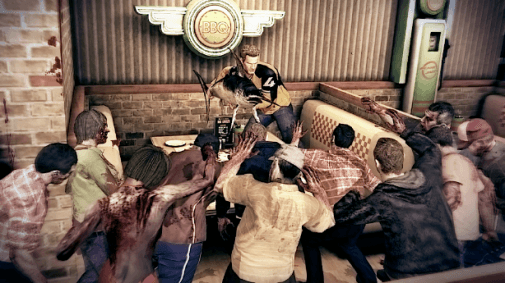 “The first Dead Rising was built in a very Japanese style.” “We had some help from America, but basically it was all done in a Japan. We wanted to do it better for a Western audience this time.”

“That’s why we’re working with Blue Castle now. They know what they like – and it’s good to have them come up with ideas and it becomes a back and forth thing. Together, we’ve come up with crazier ideas than we did in the first game. What we didn’t quite manage in Dead Rising 1 was that it still felt too Japanese. We’re much closer to feeling like a Western game with this title.”

“Felt too Japanese”? Except for small bits here and there of Japanese influence, as seen with the servbots and two Japanese survivors, I did not notice any major influences. If anything the best parts of Dead Rising were the crazy out there parts that made almost no sense at all such as the double chainsaw wielding clown.

I really hope that Dead Rising 2 does not lose it’s own personal flavoring now that it has supposedly lost more of it’s apparent Japanese influence. By the way, didn’t anyone else notice how Dead Rising was extremely close to the Dawn of the Dead movie? Right there is complete western influence. I wish that they took the stance of, if it isn’t broken don’t fix it. The only change they do make I hope is that they remove the time constraints that the first game had.