“This week, Xbox LIVE Gold members can the Call of Duty World at War Map Pack bundle for 1600 points. Normally 2000 points, it will be on sale [for 1600MSP] until until March 15th.” [Via MajorNelson]

That is a lot of content, and comes out to about 533.3MSP each. If you are a fan of Call of Duty: World at War, now is a good time to pick up all 3 map packs in this bundle.

The only downside is that, all three map packs have been on sale before for 400MSP each at separate times, and most people who play CoD:WaW already bought the map packs at those times. 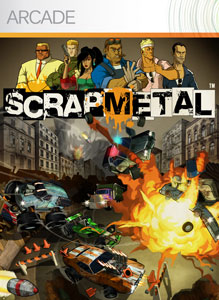 “As part of the Xbox LIVE Block / House Party promotion, Scrap Metal will be available this Wednesday on Xbox LIVE Arcade for 1200 points.” [Via MajorNelson]

Thoughts:
Drift around corners with guns blazing and take out legendary competitors in this fast-paced, top-down racing game. This game looks quite interesting and has a lot of customization. It also includes avatar awards!