Looks like the official trailer has finally been released for The Witcher 2: Assassins of Kings. The Witcher 2 is being developed by CD Projekt RED and Atari and is finally starting to show signs of completion.

“I am really glad to officially present what we’ve been working on for over two years,” said . “We learned a lot during The Witcher’s development process, and are using that knowledge to ensure the sequel is one of the best RPGs people have ever played. By improving upon the successful parts of the original and adding new elements we believe that The Witcher 2: Assassins of Kings will be loved by fans of the original and newcomers alike.”

The Witcher itself is a 3rd person RPG for the PC, and has a console counterpart coming late in the year, but is known for being very mature and containing adult themes as well. Not only that but the story was extremely in depth and compelling, being adapted from the works of Andrzej Sapkowski a polish writer.

Not only that but a hidden message was placed in the end of the video for those who could scour the video to find it, however the message has already been found and placed on the internet and is shown below, directed to their true fans and thanking everyone who has supported them through the years. 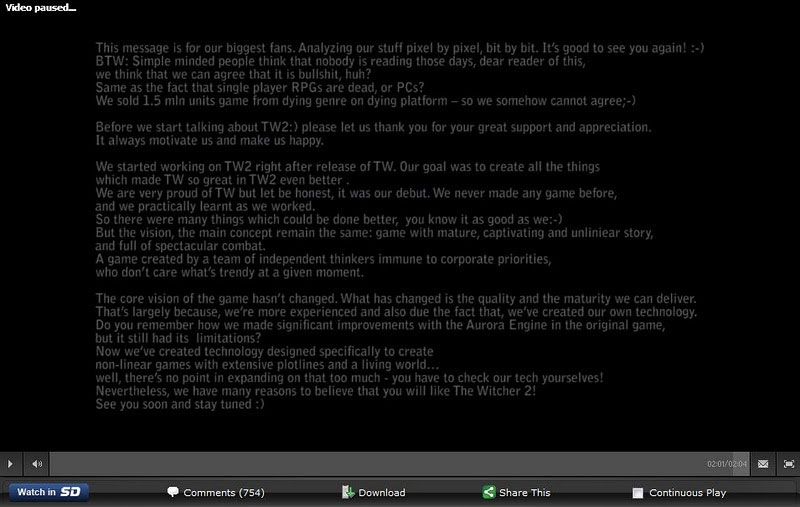 I was able to play the original game for the PC and really enjoyed the storyline and am glad to finally see an official trailer besides what has been leaked occasionally on the internet. Who else is looking forward to this game as much as I am?