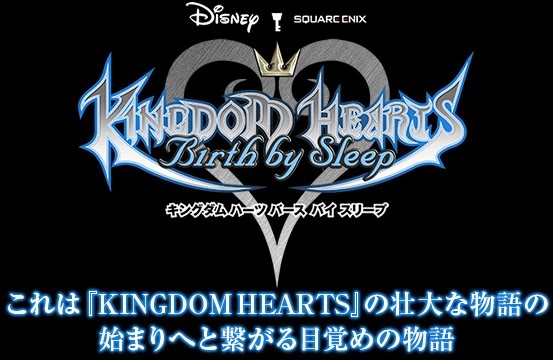 A few months after Jesse McCartney, the American voice of Sora, leaked this in twitter;

Recording yet another Kingdom Hearts Game. All you Gamers eat your heart out! Man what a process tho. First recordin was in 2005 for game 1.

Square Enix has finally addressed that Kingdom Hearts: Birth by Sleep will be coming to American shores “this Summer.” This game is supposedly a prequel to all the current Kingdom Hearts games, adding yet more backstory to the origins of the heartless and Organization XIII, yet not extending the story past Kingdom Hearts 2.

Kingdom Hearts: Birth by Sleep is exclusively for the PSP. You will be playing through as three different main characters named; Terra, Ventus, and Aqua. Only one of which has made any type of appearance before in the past games. Expect even more Disney worlds and characters to make an appearance as well. The announcement reveals Snow White, Sleeping Beauty, and Lilo and Stitch being linked to this game.

The released story so far can be read below;

Long before Sora was chosen by his Keyblade, the worlds’ safety lay in the hands of Keyblade Masters. Three youths — Terra, Ventus, and Aqua — have been training long and hard under Master Eraqus to prove that they, too, exhibit the Mark of Mastery. But they will soon find themselves in the middle of a crisis affecting worlds far beyond their own—just as another Keyblade Master, Xehanort, goes mysteriously missing.

Three friends, three destinies. Everything will link back to the beginning.

Sounds quite interesting, though I am still disapointed that they have yet to expand on the actual storyline and continue to focus on the beginning and the middle. Though they’ve also only been focusing on portable titles, instead of a console release, so that could also be the reason. Anyone else feel differently about this?