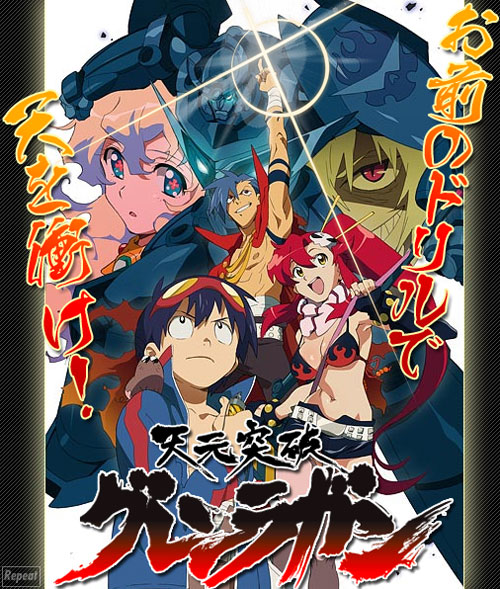 Animation company Gainex has announced that they will be releasing a sequel to Gurren Lagann Parallel Works! Gurren Lagann was an extremely popular Mecha anime that is now licensed in the US by Bandai. The show may have ended nearly two and a half years ago, but who says you need to let a finished product stand alone?

Gurren Lagann’s story was based upon a desolate world where humans live underground in tunnels dug by their own drills, fearful of the Beastmen who rule the world above. Until Simon, a resident of one of the towns, discovers a key to control a giant “Gunmen” named Lagann. Then the battle for the dominance of the world ensues.

However this is in the past and Gainex has already released Gurren Lagann Parallel Works, which is a collection of alternative universes and stories that are shown in 3-4 minute music videos set to the anime’s original soundtrack. These vary from being a tantalizing taste of what could have been, to completely odd. Though some may bear extreme resemblance to a few video game opening movies, such as Wild Arms 3.

However Gainex has now announced that Parallel Works 2 will arrive on May 26.

Personally I can not wait for this to come out. Gurren Lagann was full of comedy and action, and left you wanting for more. It’d be interesting to see if they were to take any of these changed settings and create an actual branch anime out of them.

The opening video for the original anime can be seen below.