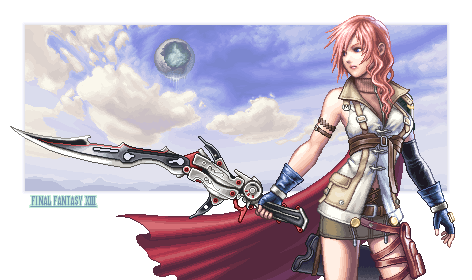 I’m sure many of us have either heard or been the source of some of the complaints about FFXIII being extremely linear in the beginning of the game. Being as there are no towns, and no shops at all. Well that may change next time around.

Motomu Toriyama, the game director behind the 13 installment, has been quoted saying the following:

“Personally, the Final Fantasy games that I have worked on have been very story-driven, so in terms of the development I wanted to, of course, use my personal strengths which where those.”

“The next title that we will create will have those (RPG) elements, and the improvements to those elements that you (the fans) were mentioning.”

I say Final Fantasy XV, because FFXIV is already slated to be an MMORPG whose beta has just opened up to possible enrollment.

So far I’ve gotten as far as Disc 2 on FFXIII, however I am actually enjoying the linear game play and loving the storyline. Though from what I have heard the gameplay expands into being more open worlded after arriving on Disc 3. So although the beginning may be linear, the entire game is not.

Especially with how some games put the storyline on the shelf and focus mostly on the action and the looks of the game, it is refreshing to see a well fleshed out story with intriguing characters (standard J-RPG archetypes included even).

Though from the looks of that statement, he was truly not expecting that many people to dislike the new changes to the series. It seems that they will be returning the game more to its RPG elements, including towns and everything that was removed.

“In the previous Final Fantasy games on non-high definition consoles, we were able to kind of take everyone’s ideas and include them in the games.

I call it a bento box system, where you have all of the different little things in there. So we had minigames or towns were you were able to talk to all of the townspeople. But with the HD console you’re not really able to do that because it takes so long to develop.”

However Bioware seemed to have no trouble making even small towns for Dragon Age. And neither did Tri-Ace when they made Star Ocean: The Last Hope. So the question is why couldn’t Square Enix?