For anyone that would like to know or is interested in the Bioshock 2 achievements check them out below.  ** There are some spoiler alerts as well in the secret achievements ** 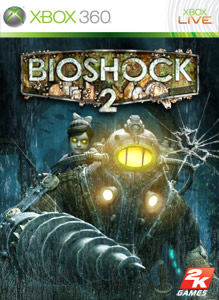 Bought a Slot – Buy one Plasmid or Tonic Slot at a Gatherer’s Garden.
Max Plasmid Slots – Fully upgrade to the maximum number of Plasmid Slots.
Upgraded a Weapon – Upgrade any weapon at a Power to the People Station.
Fully Upgraded a Weapon – Install the third and final upgrade to any of your weapons.
All Weapon Upgrades – Find all 14 Power to the People weapon upgrades in the game.
Prolific Hacker – Successfully hack at least one of every type of machine.
Master Hacker – Hack 30 machines at a distance with the Hack Tool.
First Research – Research a Splicer with the Research Camera.
One Research Track – Max out one Research Track.
Research Master – Max out research on all 9 research subjects.
Grand Daddy – Defeat 3 Big Daddies without dying during the fight.
Master Gatherer – Gather 600 ADAM with Little Sisters.
Fully Upgraded a Plasmid – Fully upgrade one of your Plasmids to the level 3 version at a Gatherer’s Garden.
All Plasmids – Find or purchase all 11 basic Plasmid types.
Trap Master – Kill 30 enemies using only Traps.
Master Protector – Get through a Gather with no damage and no one getting to the Little Sister.
Big Spender – Spend 2000 dollars at Vending Machines.
Dealt with Every Little Sister – Either Harvest or Save every Little Sister in the game.
Against All Odds – Finish the game on the hardest difficulty level.
Big Brass Balls – Finish the game without using Vita-Chambers.
Rapture Historian – Find 100 audio diaries.
Unnatural Selection – Score your first kill in a non-private match.
Welcome to Rapture – Complete your first non-private match.
Disgusting Frankenstein – Become a Big Daddy for the first time in a non-private match.
“Mr. Bubbles– No!” – Take down your first Big Daddy in a non-private match.
Mother Goose – Save your first Little Sister in a non-private match.
Two-Bit Heroics – Complete your first trial in a non-private match.
Parasite – Achieve Rank 10.
Little Moth – Achieve Rank 20.
Skin Job – Achieve Rank 30.
Choose the Impossible – Achieve Rank 40.
Proving Grounds – Win your first non-private match.
Man About Town – Play at least one non-private match on each multiplayer map.

~~Secret Achievements~~
Daddy’s Home – Found your way back into the ruins of Rapture.
Protector – Defended yourself against Lamb’s assault in the train station.
Sinclair’s Solution – Joined forces with Sinclair in Ryan Amusements.
Confronted Grace – Confronted Lamb’s lieutenant in Pauper’s Drop.
Defeated the Preacher – Defeated the Preacher.
Nose for News – Uncovered the secret of Dionysus Park.
Found Lamb’s Hideout – Gained access to Lamb’s stronghold.
Reunion – Reunited with your original Little Sister.
Heading to the Surface – Headed to the surface on the side of Sinclair’s escape pod.
Escape – Escaped Rapture.
9-Irony – Paid your respects to the founder of Rapture.
Distance Hacker – Used the Hack Tool to hack an object at a distance.
Unbreakable – Defended yourself against the Big Sister without dying.
Look at You, Hacker – Killed 50 enemies using only hacked Security.
Adopted a Little Sister – Adopted a new Little Sister for the first time.
Savior – Saved every Little Sister and spared Grace, Stanley and Gil.
Counterattack – Killed an enemy with its own projectile.