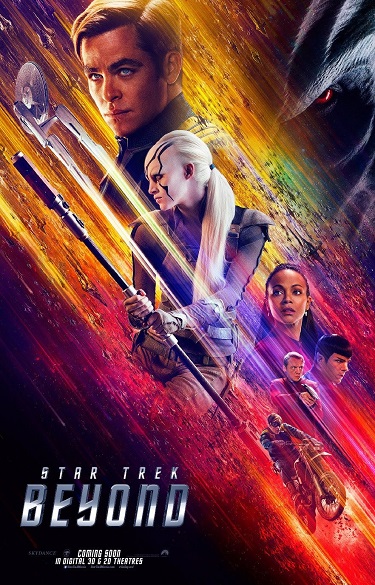 I am a huge fan of science fiction with Star Trek and its vision of a utopian humanistic future holding a special place in my heart. With that in mind, I was not quite impressed with the rebooted Star Trek movie series by J. J. Abrams which I felt were more of a glorified showreel for his eventual work on Star Wars. These films were not bad but they were certainly disappointing for anyone who was hoping for some deeper sci-fi faire to sink their teeth into… namely yours truly. So the question is, can Justin Lin’s new contribution to the rebooted series finally win me over or would I be left disappointed once again? Read on, and find out what I thought of this film.

The film returns us to the adventures of Captain Kirk (Chris Pine) and the crew of the Enterprise as they go about their galactic adventures. The narrative picks up a couple of years on from the last film with the Enterprise having explored the frontiers of charted space and are about halfway through their 5 year mission. The duration of their voyage is taking its toll upon the crew however with Kirk especially questioning his place as captain aboard the Enterprise. While resupplying at ‘Yorktown’, a space station at the edge of federation space, they agree to help rescue the crew of a stranded science ship in a nearby nebulae. This lures the Enterprise into a trap which maroons and separates the crew on an unknown planet facing an unknown and ruthless enemy. They soon realise that not only are they in grave danger but the fate of the Yorktown space station and all of its inhabitants rests on their shoulders.

Throughout the course of the story we’re taken to frontier worlds with exotic geography, encounter aliens with unusual physiologies, and play with ancient (yet somehow still very advanced) technology which plays a major role in the plot. The narrative is very much a return to the classic storylines of the original Star Trek series with plenty of sci-fi to mix in with your action. It is incredibly heartening to see the new series take this approach with Beyond as although the previous two entries featured solid stories; they did lack a certain sci-fi je ne sais quoi. I give kudos to the writer’s Simon Pegg and Doug Jung for bringing back the science fiction magic to this new iteration of Star Trek.

The plot also feels much more like an episode of the original Star Trek series due to the decentralised focus of the story. Unlike the previous two films, which very much focused upon Kirk and Spock, Beyond features a much more ensemble narrative with the focus jumping amongst the crew of the Enterprise as they attempt to solve the complications they face. Pretty much every one of the protagonists pulls out a strong performance as they work their way through the narrative and their respective character beats. Particular kudos should be directed to newcomer Sofia Boutella as Jaylah for filling the role with gusto. Urban’s performance as Dr McCoy did come across as wooden at points, as you get the sense that the sometimes the folksy mannerisms he tries to emulate from the character of the original series doesn’t quite stick right.

Although the story does certainly bring a lot more of the charm of the original series, there is still plenty of action to be had for fans of the reboot. There are plenty of gun battles and life or death struggle to get your blood pumping. This doesn’t mean that Beyond is a brainless action flick as the protagonists are routinely facing odds which are not at all in their favour and requires them to think creatively to overcome their opponents. This time around, the film did not sacrifice brains for brawny spectacle.

The only shortcoming the story has can be found in the film’s villain, Krall, who is nonetheless played very well by Idris Elba. At first glance he is quite interesting in his motivations as he largely appears to be motivated by a severe ideological opposition to the very concept of the Federation itself. This, I felt, gave the film an intellectual depth which I enjoyed immensely as we see the symbolic clash between the Utopian futurism, which Rodenberry’s original Star Trek concept epitomised, and a cynical opposition. Unfortunately this gets undercut by the film when it, in a very clumsy manner, begins to reveal more of the villain’s backstory and attempts to elicit sympathy from the audience. I would have preferred for Krall to be a pure demagogue in opposition to the very ideals of the Federation rather than a tragic villain. I feel that this direction which Krall’s character development takes is one which weakens his character and ultimately undermines the film.

The CGI and visual direction throughout the film was consistently excellent with plenty of eye candy for the audience to enjoy. The sets and costumes were all very well done as well with the protagonists and antagonists each having their own distinct visual styles to define them. The various points in the film which feature heavy CGI are done expertly with moments like the Enterprise being destroyed (for the umpteenth time) certainly getting a worthwhile sequence. You’ll also be happy to know that the presence of lens flares were greatly restrained as well.

Of particular note in this film was just how awesome the visual design for the Yorktown space station was. I’m a huge fan of science-fiction films and art which means that I’ve seen a lot of pretty cool visual concepts for what a space station could look like… but I was blown away by the look of Yorktown. Lin’s camerawork also makes certain that you have plenty of time to admire the station as he pans and swoops through structure which was certainly a visual treat I enjoyed. You might think my salivating over this detail might be overblown but, considering the narrative and symbolic importance that the station serves in the film, it was important that the film got it right. I honestly hope that they greenlight a new Star Trek television series with a focus upon the Yorktown space station akin to Deep Space 9… just sayin’.

The film’s soundtrack is a solid orchestral offering which will guide you through the film’s narrative beats appropriately. A number of stand-out tracks find their way into the film diegetically with the Beastie Boys’ ‘Sabotage’ and Public Enemy’s ‘Fight the Power’ making it in. I found their use in the film to be a refreshing juxtaposition to the regular soundtrack and I find the lampshading of referring to the Beastie Boys as ‘classical music’ to be hilarious. Beyond these two entries, I didn’t find too much else that was memorable in the film’s soundtrack.

Overall, I very much enjoyed the film and what it had to offer to both the old Star Trek series and the new film reboot. The story was much better this time around than in the two previous films, but certain narrative points with the villain undermined it’s impact to a limited extent. The visuals are top notch with CGI used to great and beautiful effect. The soundtrack is solid with some stand outs from the pop culture zeitgeist. I have to admit, this film has won me over to the Star Trek reboot and I look forward to what more the universe can bring out. I have no problem recommending this film to both trekkies and regular cinema punters. Kudos to Lin, Pegg, and Jung for bringing the Star Trek feel to this film franchise!
Capsule Computers review guidelines can be found here.

Star Trek Beyond is an excellent entry into the rebooted series with a strong story which is only slightly undermined by some questionable choices.
8.5