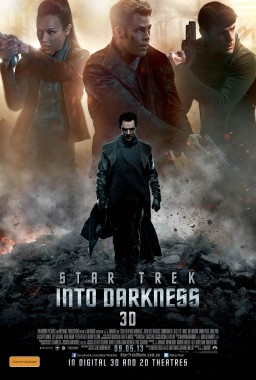 J.J. Abrams revitalised the Star Trek film franchise with his 2009 entry, and now its sequel Star Trek Into Darkness is upon us. In promotional materials leading up to release, the destruction of our world has been promised by a man named John Harrison (Benedict Cumberbatch) – a menacing man of unknown origin/motivations. And while Star Trek Into Darkness deals with securing and protecting humanity’s safety in the galaxy, it also explores personal stories along the way. But does Star Trek Into Darkness “boldly go where no man has gone before”? Read on to find out.

Class M Planet – Nibiru. The USS Enterprise is hiding below the ocean’s surface as what should be a routine exploration mission turns into a time sensitive quest to prevent an active volcano from erupting and wiping out all inhabitants on the planet. The primitive natives chase Kirk (Chris Pine) and McCoy (Karl Urban) as Spock (Zachary Quinto) attempts to detonate a cold fusion device in the belly of the volcano, rendering it inert. Plans go awry and Kirk makes the decision to break prime directive and reveal the USS Enterprise in order to reach and save Spock in time, who has resigned to his apparently forthcoming demise with grace. 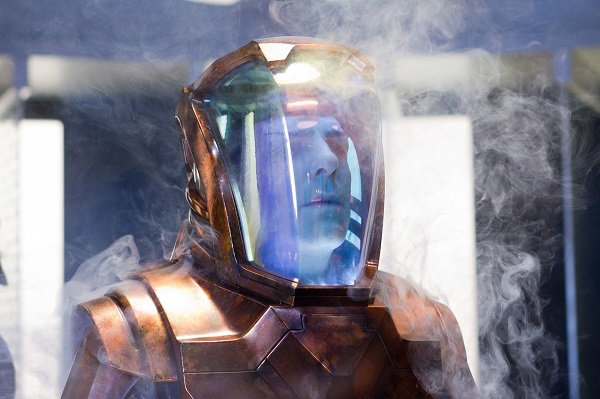 Back at Starfleet HQ in San Francisco, Kirk is reprimanded by Admiral Pike (Bruce Greenwood) after Spock filed a report on the incident, which understandably aggravates Kirk. After all, you save a man and you expect him to owe you, not throw you under the bus…but those Vulcans cannot lie, and their logical thought overrides emotion as we well know. This is a recurrent theme throughout the film between the two, that also later involves Spock’s girlfriend, Lt. Uhura (Zoe Saldana) as she grows contempt for his earlier, apparently selfish decision to accept death and care not what that would have done to her. But before they can work out their issues, Kirk is demoted, the Enterprise is returned to Pike and Spock is reassigned to the USS Bradbury.

Tensions are already high after the mysterious John Harrison convinces a Starfleet member to commit a suicide bombing at the Archives building in London, in exchange for him curing the man’s ill daughter – who has no chance of improving her state of health – with his blood. The Federation holds a meeting with all high-ranking officers convening, which includes Kirk after Pike influences Admiral Marcus (Peter Weller…ROBOCOP!) to allow the former Captain to become his second-in-command. While looking at the footage of the bombing and noticing Harrison picking up and taking a marked bag from the crime scene, Kirk questions why someone would steal public records… 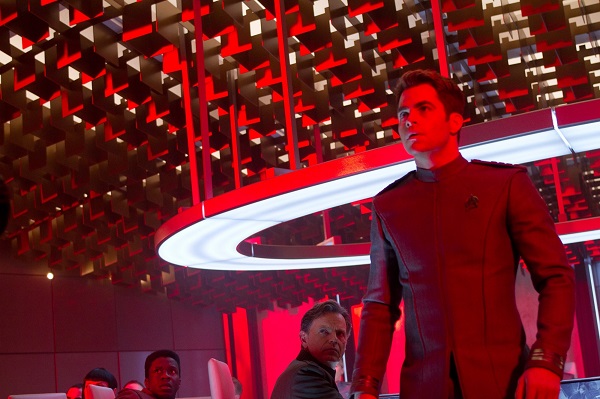 This is the point where everything goes to hell! Kirk was fractionally late in figuring out Harrison’s plan: to force a gathering of Starfleet’s best and brightest and obliterate them in one fell swoop. The lights of an ambushing aircraft suddenly bathe the conference room in red hues as it opens fire. I think this is a good point to cease spoilers at; you can imagine, however, that it’s highly improbable that everyone survives the wrathful attack. I can also confirm that the crew, once again under James T. Kirk (take that for what you will) does make a visit to Kronos – the Klingon home world – later in the film, in search of Harrison whom they located, hiding out in what they believed to be an abandoned sector.

Much has been speculated about the “true” identity of John Harrison. I won’t comment on the rumours as the reveal is a large reason for why I can’t say any more than I already have. Post-revelation, lines are blurred and allegiances become shaky. The pace of the film is great, with consistent situational threats popping up for the USS Enterprise. The dialogue can be a tad corny at times in that archetypical action-blockbuster kind of way, but it’s nowhere near as bad as an Arnie flick for instance. There are multiple, plot-moving twists that keep you on the edge of your seat, although they all occur in a confined space with the film not reaching too far in terms of scale, and preferring to focus more on the human element rather than stuffing in as many varied locales and spectacular action set-pieces as possible, for the sake of it (although your action-cravings will definitely be satisfied).

Star Trek Into Darkness looks stunning. From the beautiful introductory scene on Nibiru to the gritty, rocky ruins of Kronos. Something to note on the vivid opener; the fact that the inhabitants wore white paint (more likely some sort of ash) and yellow garb amongst the very alien red forest is a visual throwback to the tales of the beginnings of Aboriginal creative expression whereby they discovered the first “sacred ochre pigments” of red and yellow along with white and black, which is why early cave paintings, markings, and even the Aboriginal flag use those colours and those colours only. The early civilisation on Nibiru seemed to be patterned on this history. 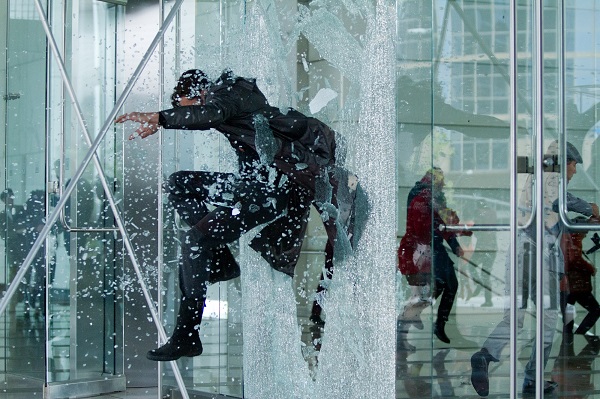 Much like in the first film, Into Darkness portrays a futuristic, yet familiar Earth. What I found interesting in particular is a shot of the Royal Children’s Hospital in London, which is practically untouched amongst the highly advanced hovering cars and floating gurneys used within. This anachronistic touch (within the Star Trek universe’s context) aids in keeping the world relatable and recognisable to the viewer, therefore creating an emotional connection to it. I also loved the establishing shots of the different planets/locations the crew would visit, the handling of which reminded me of – brace for backlash – Star Wars. Yeah I said it! But I guess it’s a good thing seeing as J.J. Abrams is directing the new Star Wars trilogy; he’s nailed that visual.

The 3D conversion was executed very well; I’m finding that most post-production conversions now highlight the subtleties of any given scene, such as the floating ambers of a fire and the light tail left after warp-speed travel in this case, which is the right way to use it. The directing overall is very good, however I do feel that the close-up zoom technique is used way too often. It seemed like every time someone had something important to say, or heard something surprising/shocking, the camera did the obligatory zoom-in on their facial expression. Thankfully it ceased after the 1st act however.

Star Trek Into Darkness receives a suitably wondrous, dramatic score from Bad Robot’s stalwart composer Michael Giacchino. As mentioned in a prior press release, the track co-written and performed by the duo of Australian songwriter/producer Robert Conley and vocalist Penelope Austin – “The Dark Collide” – featured as the background music during a bar scene where Scotty is drinking away his frustrations whilst talking his Roylan friend Keenser’s ear off (this song is only included in the Australian release). In the grand scheme of things, it was nice to hear, but it isn’t a pivotal/affecting inclusion. 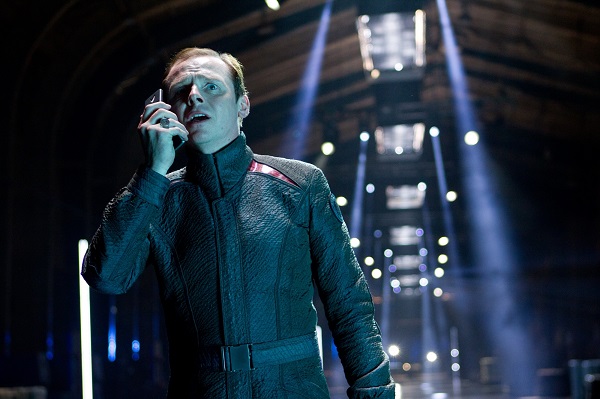 Aurally, nothing truly stood out for me, but the score and sound effects did what they are meant to do in enhancing the visuals. The only thing audio-wise that perturbed me ever so slightly is Chekov’s (Anton Yelchin) Russian accent. It’s strange because Yelchin’s parents are Russian, which doesn’t necessarily mean he could inherently pull it off, but I’d still expect it to be of some help. Yet, it just didn’t sound natural to me…or maybe the stereotypical Russian accents we hear in media that are so far off reality have been ingrained in our minds, so much so that when someone actually does it justice, we doubt its accuracy; I’m not totally sure…

Star Trek Into Darkness is an entertaining roller-coaster ride, albeit one with a somewhat limited scope. The action and performances across the board are impressive, with Benedict Cumberbatch showing why many believe him to be one of the best actors of this generation (particularly in one emotional monologue). The script is a little cliché at times, but the dynamics and meaning in the relationships between the crew of the USS Enterprise are still explored in a powerful way. Every character gets a spotlight moment, which I thought was expertly worked in, and there are numerous callbacks to classic Star Trek moments/lines. Trekkie or not though, you’ll want to beam into your local cinema to plunge Into Darkness.